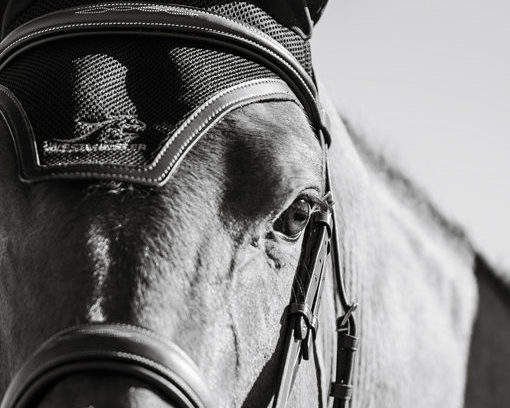 After my last blog post, Heart of The Selle Français, I thought I would write about my experience importing our very special sales horse, Danturo Manciais.

While in Normandy last fall we saw and tried many beautiful sales horses.  The final decision was difficult but we settled on our favorite horse, Danturo, a 2013 Selle Français gelding. Not only was Danturo handsome with excellent breeding, but his kind eyes and willing attitude made an early impression on us. 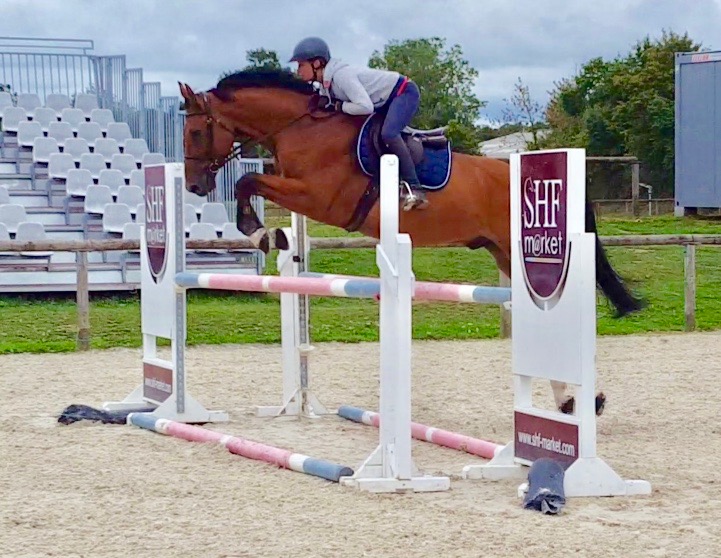 We had been looking for a horse that would translate well to the American market; primarily, one that would best fit a junior or adult amateur rider.  Danturo had been consistently jumping 1.20m in France, was very rideable on trial and brave to the fences (as Selle Français are know to be) — we felt that he would be a great first sales horse for Westminster Sport Horse Sales.

The process of importing a horse from Europe was a slightly daunting experience for me as a first time importer, so I was happy to have seasoned professionals helping us.  On our first sales foray to Europe, we were fortunate to have two great U.S. based partners assisting with the purchase and import of Danturo.  We also had an experienced French broker who could coordinate Danturo’s import to the U.S.  Having excellent contacts both on the Continent and Stateside when importing horses is essential.  There are so many details that need to be addressed, including safety, testing and transport, that having a team you can trust is crucial. 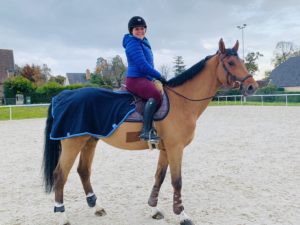 In general, any sales horse that is being imported to the U.S. should be thoroughly examined by a local veterinarian in Europe first.  Typically, for an American market, a U.S. veterinarian should be consulted for a second opinion, especially for a review of the x-rays.  Many European buyers do not take x-rays of a horse’s neck and back, but are more focused on how the horse is “going”; as long it is sound and it has a good jumping record, the buyer proceeds.  In the United States, however, there is current trend to take full body x-rays on sport horses, including neck and back.

Danturo’s full body x-rays were excellent and we then proceeded with blood tests required by Centers for Disease Control to import a horse to the U.S.  The blood tests are sent to one central lab in Germany, and the final results can take a week to ten days.  Overall, vetting and blood tests can take several weeks, so a lot of patience is needed when entering into the business of importing sales horses to the United States!

After we received the clean vetting and blood test results, Danturo was passed to our U.S. shipping partner, who arranged to have him taken by cargo van to Amsterdam where he was then loaded on a plane bound for Los Angeles.  It was a bit disconcerting to hand Danturo to a relatively unknown third party’s care, but we relied on the reputation and experience of our U.S. shipper who has been in the business of importing horses from Europe to the United States for years.  In our particular experience, because we were shipping Danturo near the holidays, his flight was delayed by about 5 days.  Danturo eventually landed in Los Angeles and was then quarantined in a specific U.S. Department of Agriculture holding facility for three days.  In quarantine, horses are monitored for signs of illness, including daily temperature readings and observation.  Danturo cleared quarantine with flying colors! 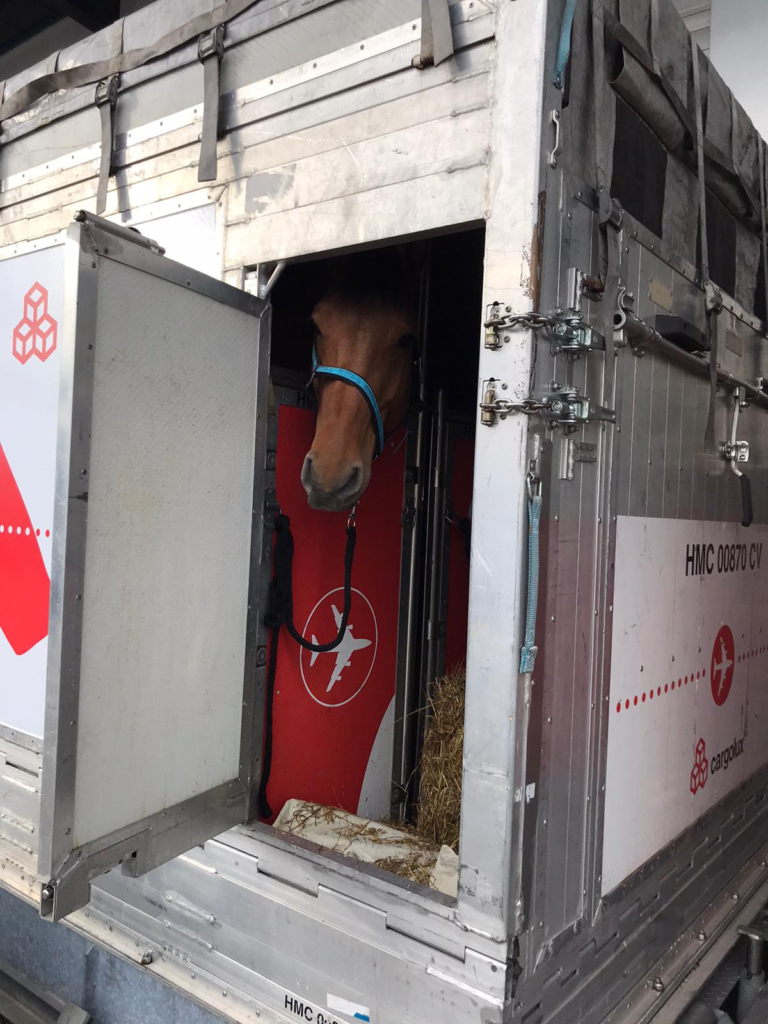 Danturo ready for his flight to L.A.!

The timing of Danturo’s arrival coincided almost perfectly with our trip to Thermal and the Desert Circuit, Weeks II and III.  After Danturo was release from quarantine, we had him transported directly to the show grounds.

We gave Danturo about 10 days to settle into his new temporary home at The Desert Circuit — did you know horses get jet lag?!  Imported horses also typically lose weight from the stress of the travel, so we made sure to give Danturo plenty of feed to improve his energy and body condition.

Since Danturo was raised and trained in France, he didn’t understand a word of English, so I spoke to him in French.  He was so adorable — whenever I spoke French he perked up his ears, and it seemed as if he was really listening to me. What a “bon cheval”! 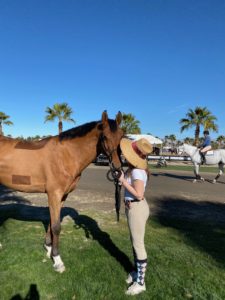 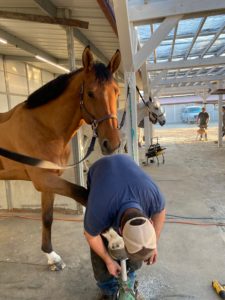 In Europe, the horses travel and attend shows almost every weekend during show season, but these shows are generally day or weekend shows and held at much smaller venues than a show like Desert Circuit (which is essentially a small city!).  We wanted to make sure Danturo was comfortable at such a big show venue.

We had fun hanging out with Danturo during this transition time, taking him on walks and getting to know him. We needed to get him shod and have his vaccinations done at the show, but otherwise he was in perfect condition.  We also discovered that he was truly is an easy going, laid back horse who loves humans and attention.

We finished Desert Circuit Week III showing Danturo in the 1.10m jumpers.  We were so impressed with how quickly Danturo had acclimated to the desert climate, the noise and activity of The Desert Circuit, his new people and his new country.

Danturo was brave, willing and showed us that he definitely knows his job in the jumper ring! 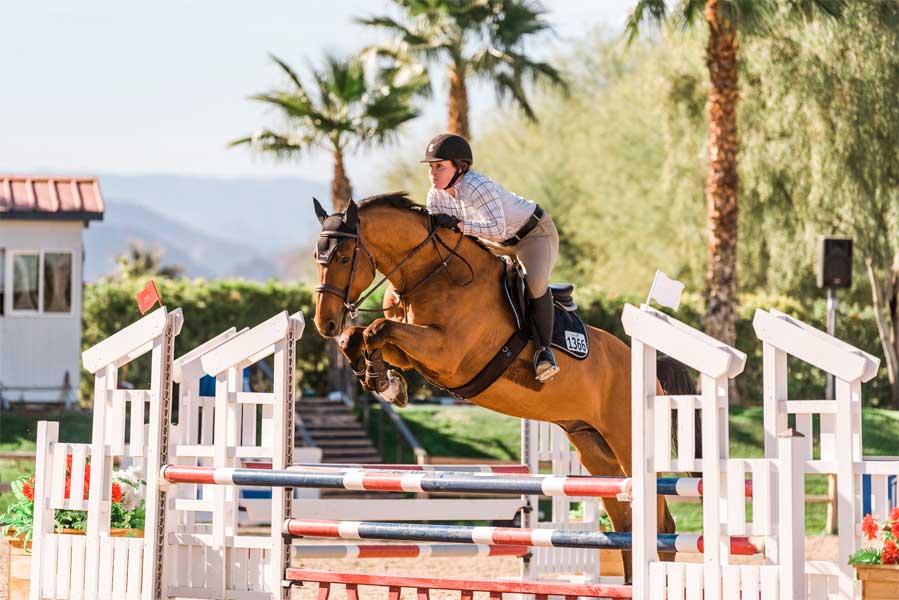 Now Danturo is with us at Elevation Stables in Bend, Oregon. Everyday, he impresses us with his even temperament, brave and willing attitude, huge step and beautiful gaits.  He has a puppy dog personality, always looking for attention and love, and he is a barn favorite!  Obviously COVID-19 has changed our sales approach but we are in full training mode with Danturo.  Currently he is learning the equitation ropes with Rachael Van den Berg of Elevate Sport Horses, as well as continuing to school jumper courses.  Once horse shows start again, we know that Danturo will be ready for success!